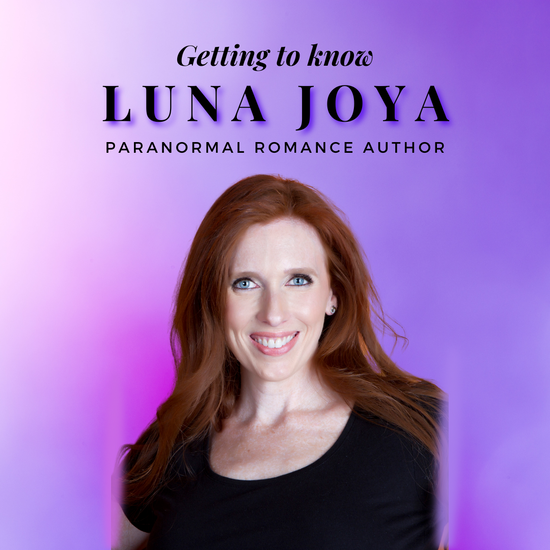 Luna Joya just released her latest book and the first in the Syn City Shifters Series, How to Date a Fury.
To celebrate we thought we'd to a bit of a get-to-know you with Luna Joya--testing our knowledge and learning more about one of our favorite paranormal romance authors. 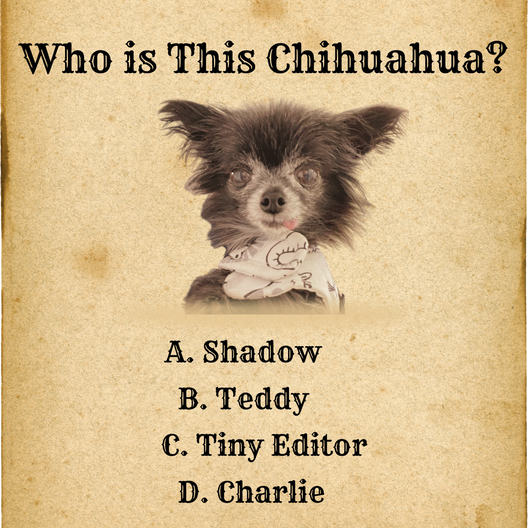 ​Anyone that spends any time on Luna's social media, knows that Luna has a partner in literary crime. But who could for a cuter fellow to have your back than him?
Do you know the name of her tiny rescue chihuahua? 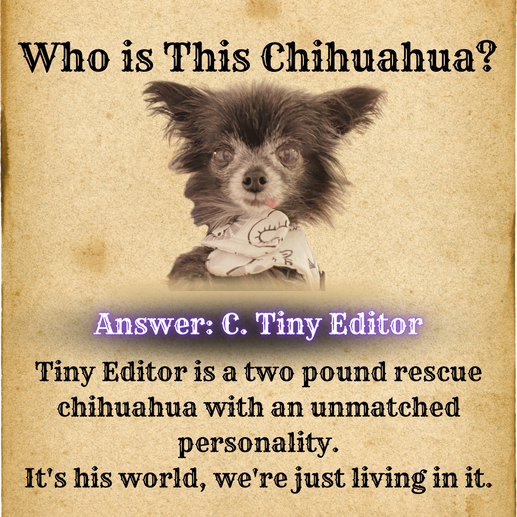 Answer: Tiny Editor
Tiny Editor was labeled an "undesirable" rescue, due to personality issues and PTSD from abusive past owners. Really, he was just waiting for the right home, and he went through three, before he found exactly where he needed to be. With his diva ways, judgy eyes that demand Luna write words, and his seat stealing ways, no book pic or video is complete without his tiny chihuahua tremble and his tiny tongue sticking out of the side of his mouth. 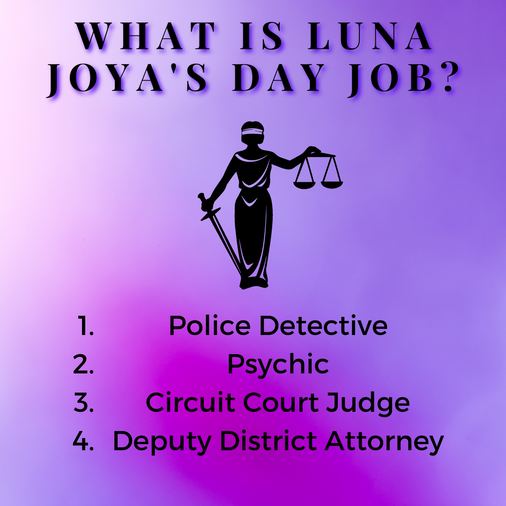 Luna has a pretty high-profile career outside of her work as a writer. While it make take a lot of time and effort, it's also very rewarding and keeps her mind in a place to solve mysteries--perfect for the mystery aspect of all of her books. What is it? 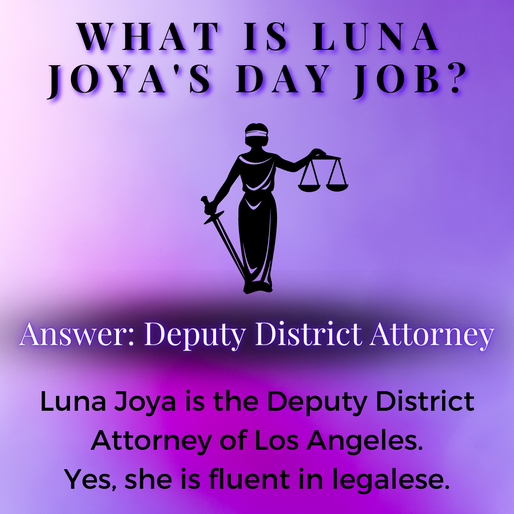 Answer: Deputy District Attorney
All of her books have an aspect of mystery to them, and the mystery is often a key to the growth of the characters. She works alongside detectives, forensics, and attorneys, both prosecutors and defense, and has a front seat watching our judicial system work, and that passion seeps into her books. 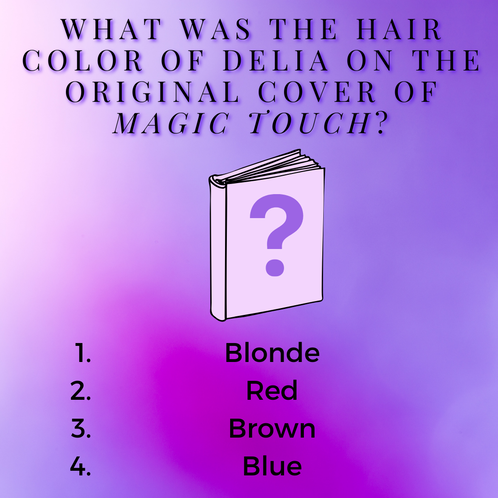 Joya's Legacy Series recently under went a cover change--from couples to sizzling abs and enticing pecs. But the internet has a very long memory, and you can still find her old covers in places. So the question is--what was the hair color of Delia on the cover of the first book of the Legacy Series, Magic Touch?
Hint: The original cover is still on the audiobooks. 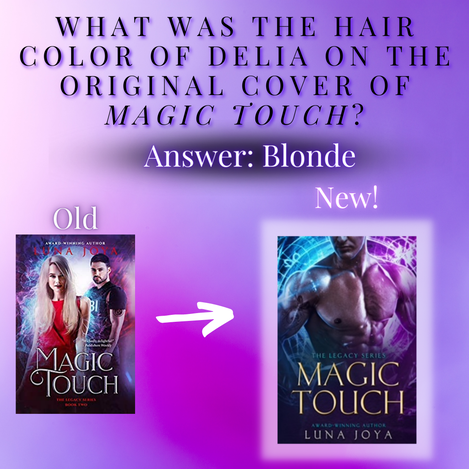 Answer: Blonde.
City Owl and Luna Joya decided sometime earlier this year to give the Legacy Series a face lift and the final results were released to the public in August. The Legacy Series follows the Donovan sisters, and is completed series, with Flash Point being the final book within it.
Magic Touch is the first book in the series, featuring the oldest of the Donovan sisters, Delia Donovan, who on top of juggling her family's magical secrets, is asked to join a special FBI  taskforce to solve a murder. And if there happens to be a bit of tension between her and Mark, the reluctant prosecutor... Well, opposites do attract... 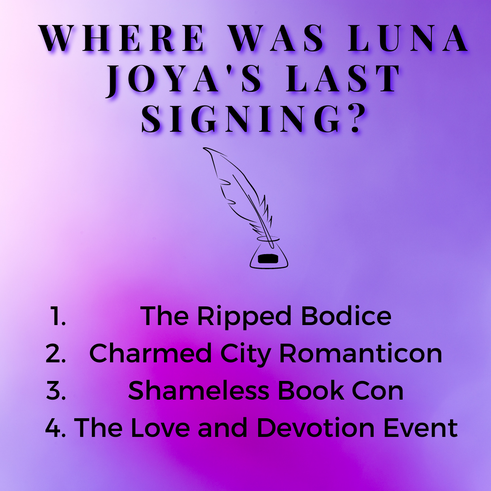 ​Luna Joya has been to a couple of events already this year, but what was her last one? 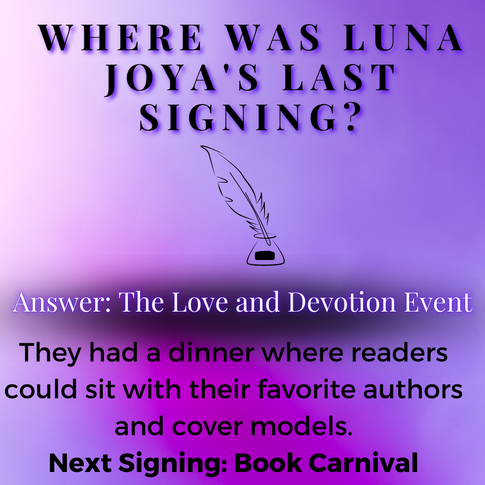 Answer: Luna last attended the Love and Devotion Event to sign her books.
The event held authors and cover models and readers were welcomed to join them for lunch at the Sheraton Hotel and Marina.
Her next upcoming event will be at a Book Carnival in Orange, California from noon to 2p.m.
You can find pictures of her Love and Devotion Event and the Open Canyon Signing that happened before it, here. 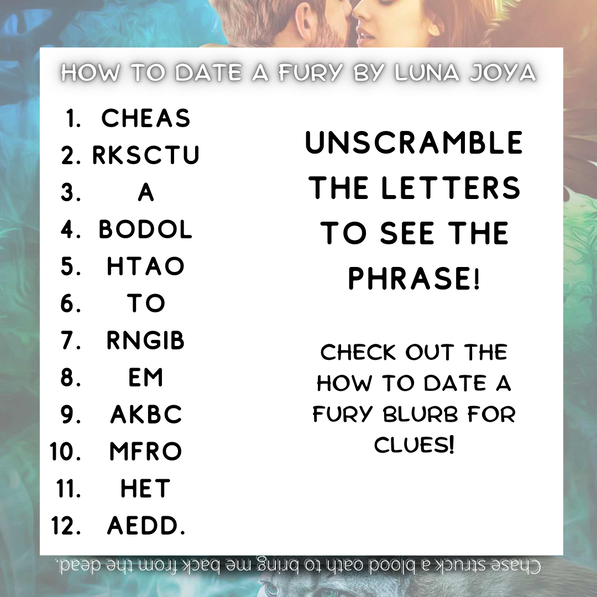